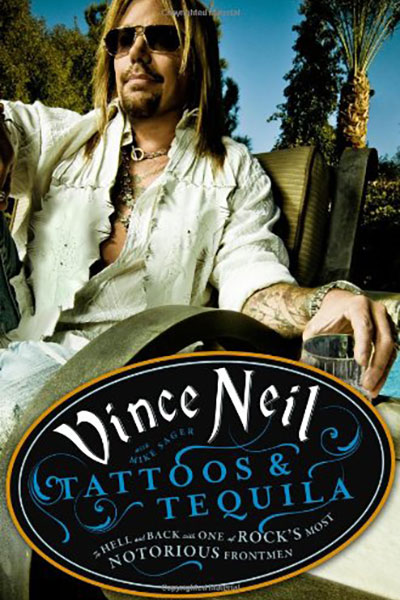 To Hell and Back with One of Rock's Most Notorious Frontmen

"Like so many rock stars who survive into their 40s, Mötley Crüe frontman Vince Neil has produced an autobiography.

"Raised in Compton, Calif., just as gangs were starting to take over, Neil turned multiracial good looks and a bad attitude into a career singing for the leading hair band of the 1980s. Mötley Crüe embraced the values of rock star excess and garnered fame as much for their drunken exploits as for their music. In one grim episode, an inebriated Neil crashed his Ford Pantera into a Volkswagen, killing his passenger and critically injuring two others. Later, Neil was ejected from the band but eventually returned.

"Today, he lives in Vegas, making music and running several businesses, including a chain of tattoo parlors. Neil makes no pretense of being thoughtful or reflective, but with Sager’s help he’s done a more than adequate job of representing himself. Much is said about all the women he’s had, all the drugs he’s done, all the nice cars he’s owned, and all the celebrities he’s met. Yet within the rock-star braggadocio lies an entertaining story of a handsome, insecure guy with a lot of energy who got really lucky. Interviews with friends, business associates, and ex-wives bring much-needed depth to the narrative. To his credit, Neil deals honestly with the suffering he’s caused.–Publisher’s Weekly

Mike Sager: Is that a true story?

Vince Neil: Absolutely. It was when we’d just had sex with girls in the studio and we didn’t want to go home smelling like them. There was a restaurant called Naugles. It was open twenty-four hours. And we would order egg buritos and wipe our dicks with them. Then if you went home smelling like an egg burrito, you just told your girlfriend, “Oh, I dropped my egg burrito in my lap.”

Mike: So did you actually open the burrito and insert? Or did you just, like, use it as a washcloth.

Mike: All right, good. Thanks. I just had to ask. You know, Marlon Brando once fucked a duck in Paris. I wrote about him, too.

Mike Sager is a bestselling author and award-winning reporter. He’s been called “the Beat poet of American journalism.” For more than forty years, he has worked as a writer primarily for the Washington Post, Rolling Stone, GQ, and Esquire.  Sager has written a dozen books; a number of his stories have inspired movies and documentaries, including the classic Boogie Nights. He is the editor and publisher of TheSagerGroup.net, a content brand.